Views from Alongside a Border

The Rio Grande Valley is bounded to the east by the Gulf of Mexico, to the south by the Rio Grande River, and to the north and west by an enormous desert of thorny shrubs.

It is the eastern edge of America’s southern border. 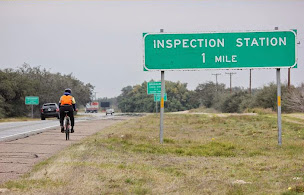 There are two highways that cross this border region. About eighty miles to the north of the Rio Grande, the US government has set up permanent inspection stations on these highways, effectively adding a second border to the Rio Grande. People travelling north along highway 77 or highway 281 are stopped and inspected by border patrol agents, who are part of the national security apparatus.

An immigrant who does not have the documentation that the US government requires for their travel north may choose to leave the highway at a point before these checkpoints, and set out through the brush country in…